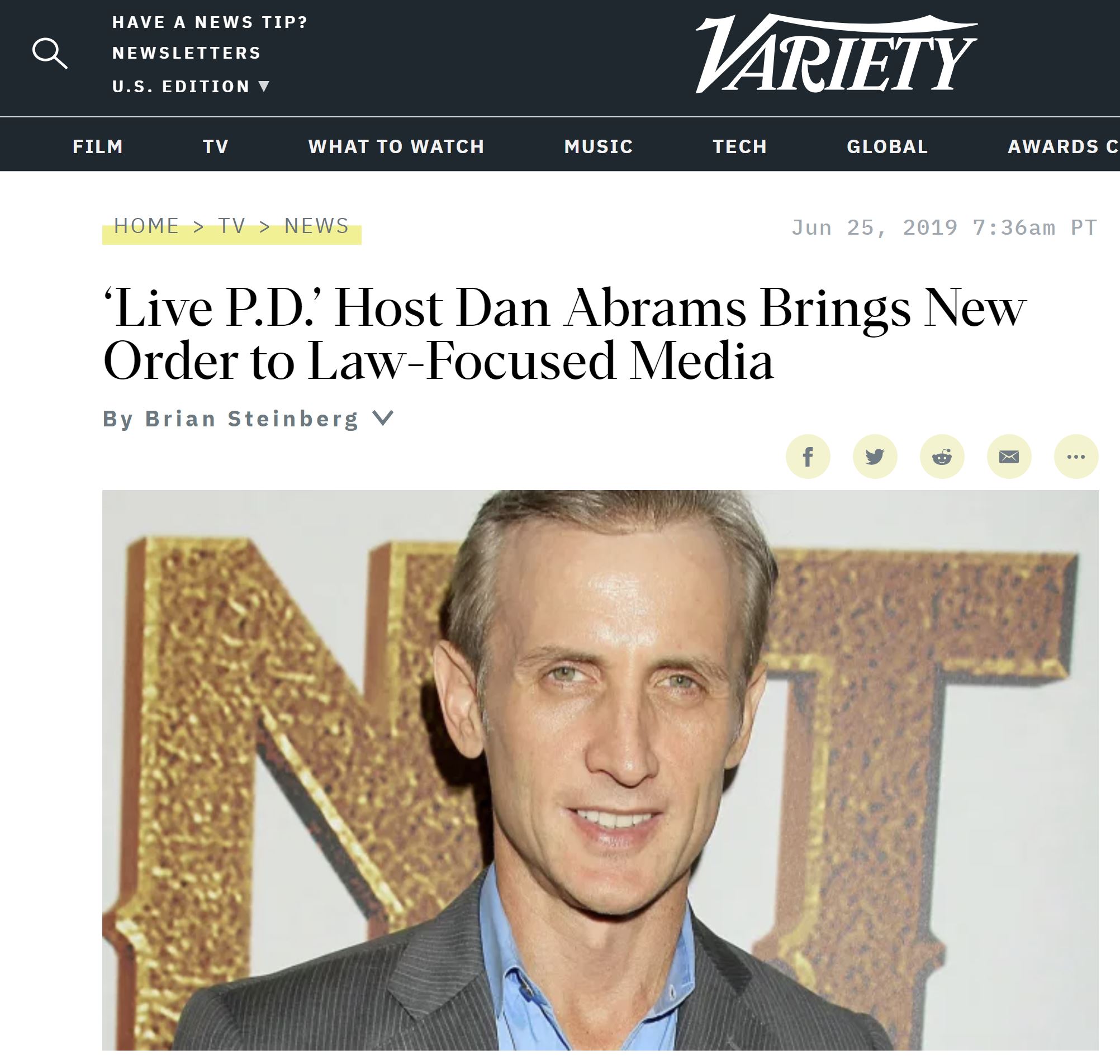 Variety reporter Brian Steinberg recently spoke with Dan and sat in with him on his daily SiriusXM radio show. The article, titled “‘Live P.D.’ Host Dan Abrams Brings New Order to Law-Focused Media,” takes a deep dive into Dan’s current and former endeavors and how he balances so many unique responsibilities.

“It is, to some degree, different lives,” notes Abrams, sitting behind an adjustable desk in his company’s Manhattan offices. “I have the life of running a growing company, and everything has to be done economically, and I have to be monitoring how may coffee refills we get. And yet I live a very different life as an on-air guy, where the coffee is plentiful.”

Being the Chief Legal Correspondent for ABC News, and being the CEO of his own companies pose very different challenges. Steinberg reached out to Dan’s ABC News colleague to understand just how he does it.

“Figuring out how to connect the dots of his various enterprises might be difficult, but George Stephanopoulos, the ABC News anchor, can do it: Abrams is working on a way to keep up with the nation’s increasing fascination with the overlap of law, media and politics. “He can play in all of these different arenas,” says Stephanopoulos, in a brief phone interview.”

Dan’s work as host of Live PD, the number one show on cable, contrasts his smaller four media companies. But the mid-size media outlets are quickly growing. Two of the four, the Law & Crime Network and Mediaite.com, recently helped create a business deal between multiple news outlets.

Dan described to Steinberg the goal of the new deal:

“In a world of internet behemoths, it can be tough to compete for ad dollars as a mid-sized web property. So with the 2020 election around the corner, we thought the best way for us to get some of the political advertising that will be flooding the internet was to join with other similarly sized sites and offer larger packages together,” says Abrams, adding: “Since the announcement we have had a number of other sites inquire about joining the coalition as well.”

The two companies fit perfectly into the alliance.

From TV green rooms to the corridors of the senate to the latest White House press briefing, Mediaite is a trusted source on the intersection of politics and media across the political spectrum. Breaking news, analysis and opinions aplenty, Mediaite delivers it all with lightning quick speed.

Law & Crime is both a 24/7 live trial network, as well as a website that hosts multiple live trial streams and expert legal articles. LawandCrime.com is the only site for live court video, high-profile criminal trials, crazy crime, celebrity justice, and smart legal analysis. Law & Crime brings common sense written and video analysis to the often confusing and always intriguing world of the law. The site’s team of journalists and lawyers provide real-time news updates along with live courtroom coverage of the most fascinating trials and legal stories.

Variety’s piece was published in the wake of wide media attention around Dan’s new book, Theodore Roosevelt for the Defense: The Courtroom Battle to Save His Legacy.