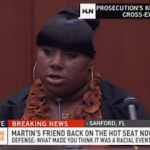 From Mediaite:  Trayvon Martin’s friend, Rachel Jeantel, faces her second day on the stand where, after a shaky yesterday, she is being grilled by the defense.  Reports Mediaite, “Witness Rachel Jeantel — who was on the phone with Trayvon Martin moments before he was killed — was back on the stand on Thursday, again facing a grilling from George Zimmerman‘s defense attorney Don West. Alluding to yesterday’s testimony, West asked about Martin characterizing Zimmerman as a ‘creepy-ass cracker’ — which Jeantel felt was not a racist remark.  West questioned Jeantel about why she felt the shooting was racial. Jeantel pointed to Martin’s description of ‘the person that was watching him and following him.’ West repeated, ‘Describing the person is what made you think it was racial?’ Jeantel agreed.”  Read on here. 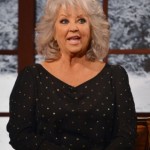 From Gossip Cop:  Novo Nordisk, a diabetes drug company, dropped Paula Deen.  Reports Gossip Cop, “The embattled celebrity kitchen personality partnered with the company in 2012 to promote its drug Victoza.  On Thursday, the pharmaceutical company announced, ‘Novo Nordisk and Paula Deen have mutually agreed to suspend our patient education activities for now, while she takes time to focus her attention where it is needed.’  The statement continued, ‘Novo Nordisk would like to acknowledge Paula’s involvement in our Diabetes in a New Light™ campaign, where she has helped make many people aware of type 2 diabetes and the lifestyle changes needed to control this serious disease.'”  Read on here. 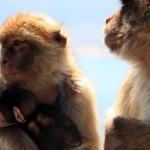 From Geekosystem:  Being friendly might actually be a key to survival.  Geekosystem explains, “Turns out, it’s not just good manners and a way to ensure regular showering — it may also be an evolutionary trait that helps us survive tough times. A study of Barbary macaques in Northern Morocco suggests that natural selection may favor the ability to make social connections.  The study was conducted following a particularly harsh winter during which snowfalls greatly reduced the food available to the monkeys. By the following spring, the harsh conditions  found the population of 30 Barbary macaques reduced by nearly half. In an effort to learn what factors may have decided which macaques live and which died, scientists studying the endangered monkeys began examining data on the group from the six months prior. Their analysis, published this month in the journal Biology Letters,  showed a correlation between social relationships and the ability to survive extreme conditions.”  Read on here. 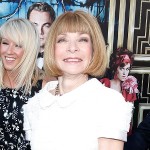 From Styleite:  Fashion’s first tweets in regards to DOMA.  Styleite reports, “Well, wasn’t yesterday one for the history books. Australia’s PM was ousted, Oprah run the world, #DOMA was overturned in the Supreme Court and Anna Wintour Tweeted! Vogue‘s EIC deemed the dumping of the Defence of Marriage Act monumental enough to take her Twitter virginity, logging into Vogue’s account to announce the following: ‘Today’s rulings are a big step forward for all Americans striving to achieve equality. I couldn’t be happier or more proud. —A.W.’  To commemorate the day Anna Wintour did Tweets and felt feelings, we dug into the digital archives for more fashionable debuts.”  Read on here. 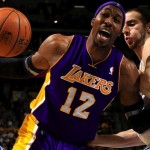 From SportsGrid:  Dwight Howard is leaving the Lakers.  So, where is he going?  SportsGrid reports, “Chinese actor Dwight Howard reportedly does not want to re-sign with the Los Angeles Lakers, despite L.A.’s desperation in keeping their ‘star.’ Of course, this is the same guy who wanted out of Orlando and into Brooklyn then into Orlando then back into Brooklyn then under the sea was where he wished he could be, but it was too late.  A system that better uses his skill set would be a kindergarten basketball team, where kids would respect his childish antics. He also isn’t going to the Clippers and Chris Paul isn’t coming to the Lakers. Sources say.  So, the news is that Dwight Howard thinks he’s going to the Mavs and regardless of what he chooses, he’ll probably never win a championship.”  Read on here. 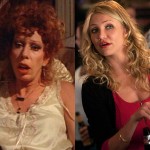 From The Mary Sue:  We love you Miss Hannigan!  In the remake of Annie, Cameron Diaz has been cast to play Miss Hannigan.  Reports The Mary Sue, “It’s official, Cameron Diaz will play Miss Hannigan in the Annie remake. All together now – WE LOVE YOU MISS HANNIGAN!  Previously, Sandra Bullock was connected to the role made famous by Carol Burnett in 1982′s Annie. She eventually passed (bummer, I think she would have been perfect), allowing Diaz to scoop up the flask of the drunken orphanage manager.  Diaz will get to pull little Quvenzhané Wallis (starring as Annie) around by the ear in the film being produced by Will Smith and Jay-Z.  Annie will also feature an updated Daddy Warbucks in the form of Benjamin Stacks, played by Jamie Foxx.  We’re still not sure if this updated version is going to be a musical (or be set in modern times for that matter), but what do you think of Diaz in this role? Any choices for her brother Rooster?”  Read on here. 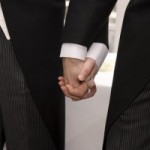 From The Jane Dough:  What does the DOMA ruling means for same-sex couples finances?  The Jane Dough explains, “The issue of DOMA’s constitutionality was brought to the court in Windsor v. United States. Edith Windsor originally filed the suit after she was charged $363,000 in estate taxes following the death of her wife because same-sex couples previously did not qualify for the federal tax exemption available to opposite-sex couples.  In accordance with the court’s ruling, the 40% tax on estates over $5.25 million, which originally cost Edith Windsor, will now be a thing of the past for same-sex couples.  At least 82,500 gay couples have wed in states that allow it since same-sex marriage was first legalized in Massachusetts in 2004, according to The New York Times.”  Read on here. 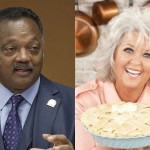 From The Braiser:  Civil rights activist, Jesse Jackson, was contacted by Paula Deen yesterday for some PR help.  The Braiser reports, “According to the AP, Jackson blasted the public for turning Deen into a ‘sacrificial lamb’ whose scandal overshadows real issues of racial intolerance: ‘Jackson says he’s more troubled by racial disparities in jobs, lending, health care, business opportunities and the criminal justice system.’ (But…but…but making fun of Paula Deen is so much more fun than confronting facts like, say, how the recent Supreme Court ruling on the Voting Rights Act just disenfranchised minorities! Insert butter joke here! Oh, ho ho.)  Jackson says that, ‘if Deen is willing to acknowledge mistakes and make changes, she should be reclaimed rather than destroyed.’ We can agree with that, it’s just that Paula Deen has, so far, not really indicated that she’s willing to change, if her half-hearted and ill-conceived attempts at apologies are evidence enough.”  Read on here.