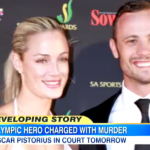 Dan appeared on Good Morning America today to continue covering the case of Oscar Pistorius, charged with murdering his girlfriend and set to appear in court tomorrow. Today, he discusses new allegations against the Olympic runner, including possibly incriminating information leaked.  Says Dan, “Everything we’re hearing about this case day by day makes it worse and worse for Pistorius. Every detail that we hear makes it harder to accept this notion that he may have thought it was an intruder and accidentally shot, etc., so everything from the possibility of any kind of bloody item to her being shot in the bathroom through a wall — every single detail is problematic for him at this point.” For more, including what might happen in the bail hearing tomorrow, watch the video here.