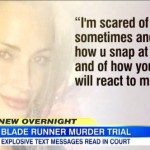 Dan was on Good Morning America, Tuesday March 25th to discuss the latest on Oscar Pistorius. The prosecution showed text messages between Pistorius and Reeva Steenkamp to highlight problems they were having in their relationship. Some of these messages from Reeva state that she was scared of Pistorius at times and that he would lash out at her. What are the implications of this evidence? It’s really important in backing up the ear witnesses. Says Dan, “It’s really important in backing up the ear-witnesses so you have witnesses coming in and saying, I heard a fight. I heard a man, I heard a woman. There was a fight there. That is crucial for the prosecution’s case because if they can demonstrate there was a fight followed by the shooting they probably have a murder case. Now, what this does is it provides context. It says, wait a sec, this isn’t out of left field. This isn’t out of nowhere. These are aren’t people who never had these sort of blowouts before. We don’t know exactly the degree but the fact that she’s talking about the fact that she was scared I think provides context and support for these ear-witnesses’ testimony that’s crucial.” Watch the full clip here.