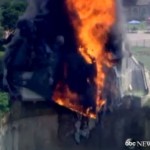 Dan anchored for Nightline, on Friday, June 13th. The episode began with a deeper look inside the case of a pastor from California charged with murder. Robert Cox was leading a mission trip across the country when he and the group stopped at a restaurant in Las Vegas, Nevada for a late dinner. They were in the parking lot when 55-year old Link Ellingson aggressively approached the group and began to harass them ( says witnesses). Cox intervened to protect the youth group and pushed Ellingson away. Ellingson hit his head on the pavement and fell into a coma, dying 6 months later. Initially the local D.A wrote Cox a letter saying no charges would be filed but after Ellingson died authorities took a new look at the case and the police showed up with an arrest warrant for murder. Nightline sits down with Pastor Cox and others to discuss the case. Next, Nightline follows one of the country’s top trauma surgeons during his 24-hour shift. Dr. Peter Rhee, who helped save Gabby Giffords, honed his surgical skills while serving in Iraq and Afghanistan and has been able to use this knowledge to increase survival rates for serious injury. Finally, Nightline interviews the homeowners of a beautiful luxury home in Texas,  who had no other choice but to burn it down. Watch the full episode here.