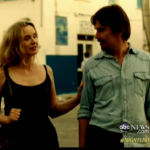 Dan was behind the anchor desk of Nightline, Wednesday, February 12th. The episode took a look at what it is like to buried in an avalanche and how people are rescued. Next, Nightline went behind the scenes with newly Oscar nominated actors, Ethan Hawke and Julie Delpy. Finally, the Feed Frenzy focused on Yankee player, Derek Jeter, annoucing his retirement after the 2014 season. Watch the full episode here.