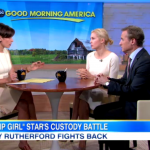 Dan continued to voice his legal knowledge and support for Kelly Rutherford in her ongoing custody battle, today joining her on Good Morning America after yesterday appearing with her on The View. To recap, Rutherford and ex-husband Daniel Giersch split in 2009, with a son Hermes and a second child, daughter Helena, on the way. Giersch, a German citizen, had his visa revoked, making joint custody difficult. A judge ruled that the children, American citizens, should move to France with their father, despite no family ties in the country and their lawyers recommending they stay in the states. Dan is outraged about the verdict, feeling like the judge served as more of a “travel agent” than regarding the children’s best interest or future. Watch Dan and Kelly talk about the case here.