13 Sep Dan on ‘The View’ with Kelly Rutherford 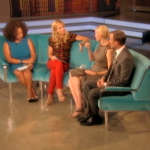 Today, Dan appeared on The View to continue discussing the sad custody battle of two kids effectively deported to France for no seemingly good reason. Dan appeared alongside Kelly Rutherford, star of Gossip Girl and mother of these children, as well as View co-hosts Elisabeth Hasselbeck and Sherri Shepherd to talk about what actually happened. To re-cap, Rutherford and ex-husband, Daniel Giersch, divorced when she was three months pregnant with their second daughter. They split custody, until Giersch’s American visa was revoked. Since then, Rutherford has been traveling all over the world to allow him visitation rights, but now a judge ruled they should go live with him in France – even though the two children were born and raised here, the family has no connections in France, and the lawyer representing the children recommended they stay in New York with Rutherford. Dan points out the ridiculousness of this ruling: “Some people are going to be saying, come on, Kelly must have done something wrong, and that’s what I thought when I first saw this case, I assumed ‘there’s gotta be something else here,'” says Dan but goes on to explain this simply isn’t the case. Watch the segment here.