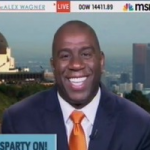 From Mediaite: ObamaCare has a supporter in Magic Johnson. Mediaite writes, “Former NBA player Earvin “Magic” Johnson joined MSNBC host Alex Wagner on Monday to discuss his career in professional basketball and how college basketball’s March Madness is shaping up. At the end of his appearance, Johnson signed off with a quick aside. He noted that, as one of the most high profile HIV-positive individuals, he talks with a lot of medical professionals and they tell him that ‘Obamacare is working.’ After concluding his appearance and being thanked for his insights into the current state of professional and college basketball, Johnson endorsed the Patient Protection and Affordable Care Act of 2010.” Read more here. 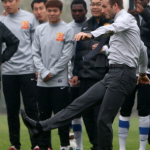 From Gossip Cop: Even David Beckham can make a full of himself, writes Gossip Cop: “David Beckham may be a soccer superstar, but even pro athletes slip up — literally — every now and then. The former L.A. Galaxy player was visiting the Wuhan Zall Football Club in China on Saturday, when he started playing around and showing off his skills on the field. Unfortunately, Beckham lost his balance while attempting a kick, and totally wiped out. Beckham, who was in the Asian country as the Chinese Football Association’s first international ambassador, presumably had a much easier time playing with the youth league. The athlete said he hopes to use his new role ‘to inspire more kids to want to play the game I love and draw more fans to watching the game in China.'” Read the story and see photos here. 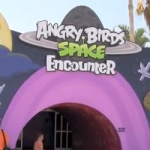 From Geekosystem: NASA is luring children to learn about space… with Angry Birds? Geekosystem reports, “We need to get kids interested in space, obviously. We need many of them to grow up and become astronauts, or man the ground controls at NASA, or at least help counter future space funding cuts, but how, exactly, can we get kids to like space? Well, since we can’t send dinosaurs into space, NASA is doing the next best thing: They’ve created an Angry Birds space exhibit at the Kennedy Space Center! Now kids have no choice but to go there and collaterally learn about the universe. This isn’t the first collaboration between NASA and Rovio Entertainment — Angry Birds in Space is already a thing, and was announced a year ago from the International Space Station.” Read on here. 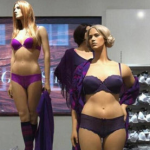 From Styleite: Why aren’t stores using fuller-figured mannequins? Styleite investigates: “Swedish department store Åhléns has been the subject of some debate recently ever since a photo of two of their mannequins went viral — and for once, it isn’t because the mannequins had protruding bones,pencil-thin legs, or were construed to promoteeating disorders. Nope, these plastic ladies stood out because, unlike most we encounter in malls and shops around America, they represent women of an average size. Australia’s Today’s Woman says that the mannequins are sizes 12 and 16, asking Facebook fans to ‘like’ and ‘share’ their photo if they would like these to become common in more stores… According to ABC News, the average store mannequin is a size 4 or 6, although in our own experience, those in high end shops tend to skew even smaller.” Read the whole piece here. 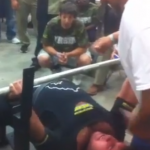 From SportsGrid: How many pounds can you bench press? We’d bet this high schooler in Texas has you beat. SportsGrid reports, “Need some motivation to start your Monday? Something that’ll make you feel like a complete waste of space if you don’t get up and attack the day with everything you have? How’ a guy benching 700 pounds grab you. Actually, strike that – how’s a teenager benching 700 pounds grab you? That’s Matt Poursoltani, a 5-10, 270-pound senior at Pilot Point High School in Texas (yes, he also plays football, though his frame is pretty much ideally suited to bench pressing excellence, whereas college football powerhouses would likely want their defensive linemen to be a bit taller).” Read more about his feat here. 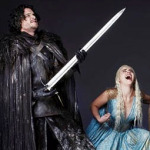 From The Mary Sue: Is it possible to get HBOGo without HBO? The Mary Sue writes just maybe one day: “Good news, HBO-less Game of Thrones fans. HBO has heard your pleas to make HBO GO, their online streaming service, available to those who don’t have cable. And they have responded with a resounding ‘Maybe. Eventually.’ Hey, it’s better than ‘no.’ In a recent interview HBO CEO Richard Plepler acknowledged that, yeah, if he wants to maximize the number of people who watch Game of Thrones legally, then HBO probably needs to provide more options for them to do so. To that end, Plepler explained that HBO is open to the idea of  bundling HBO GO with broadband cable service in the same way HBO is currently bundled with cable TV service, made easier by the fact that many of the cable TV providers HBO partners with (like Time Warner, Verizon, and Comcast) offer Internet services as well.” Read the details here. 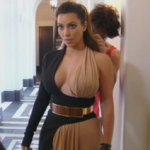 From The Jane Dough: Everyone has to plan for their future financially, even the Kardashians. The Jane Dough explains: “Lest you think that Kim Kardashian’s life is entirely made up of brand endorsements and practicing her vocal fry in the mirror, on last night’s Kourtney and Kim Take Miami Kim had to learn an important lesson about overspending. Or, since this is her show we’re talking about, she ‘learned’ an ‘important lesson.’ It all started when Kim’s best friend, the Puck-ish Jonathan Cheban, showed her a post from a website decrying her style, with a headline that suggested Kanye might be to blame. Kim was aghast, both at being on the worst dressed list and at the implication that her boyfriend has the time to dress her every day — after all, it’s the days that he does that everyone likes what she’s wearing. In response, she went on a massive shopping spree, with a mirthless Cheban and Kourtney in tow.” Find out how it ends here. 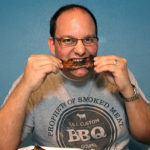 From The Braiser: Looking for a new job? How about “barbecue editor”? Really. The Braiser writes, “In a first for the food publishing world, but a “Why the hell did no one ever think of that” moment for the rest of the world, Texas Monthly announced that it would be the first publication to ever have a full-time barbecue editor. The New York Times reports that Daniel Vaughan, a former Dallas architect and popular barbecue blogger, quit his job at a major firm to become the Texas Monthly’s full-time barbecue editor, a task that he takes as seriously as, say, Pete Wells takes his job. And with good reason, too: Vaughan not only has a Bourdain-imprint book coming out in the next month, but he’s also a progenitor of America’s barbecue mania, whose epicenter is in the heart of Texas.” Read more about him and the job here.