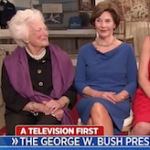 From Mediaite: Might there be another President Bush one day? Doesn’t seem likely, writes Mediaite: “Timed with the opening of George W. Bush‘s presidential library, Matt Lauer sat down with former first ladies Barbara Bush and Laura Bush (as well as Laura Bush’s daughters Jenna and Barbara) on Today. In a wide-ranging interview, Lauer eventually arrived at the inevitable 2016 question, asking the family their sentiments about Jeb Bush‘s potential presidential bid. Barbara Bush was bluntly opposed. ‘He’s by far the best qualified man, but no,’ the former first lady told Lauer.” Read on here. 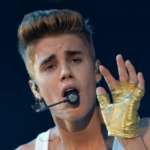 From Gossip Cop: More trouble for Justin Bieber, reports Gossip Cop: “Justin Bieber’s tour bus was busted by police in Stockholm, Sweden on Wednesday night after cops reportedly found marijuana and a stun gun onboard the vehicle. A police spokesperson tells the Associated Press that police officers detected a strong smell of pot coming from the bus as they patrolled the huge crowd outside Bieber’s hotel. It’s not known whether the pop star was on the bus at the time. The spokesman says that law enforcement authorities later searched the empty bus when it was parked outside the Globe Arena, where the singer was performing, and found a small amount of narcotics. Police would not confirm whether the drug was marijuana.” Read the story here. 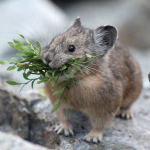 From Geekosystem: When you order dinner, the waiter may ask you if you’d like fresh pepper on top. However, if you were a pika, he may ask if you’d like some feces instead. Geeosystem explains, “Life in the wilderness is no bowl of cherries, and animals aren’t exactly known for graciously sharing their food. One exception, though, may be Canadian pikas. A recent study from the University of Alberta shows that the little mammals actually prefer leftovers sometimes, choosing to dine on patches of vegetation that have already been grazed on — and thus also pooped on — by caterpillars. Exactly why isn’t understood yet, but researchers suspect that the caterpillars’ leavings may act as a sort of seasoning for the plants.” Read more here. 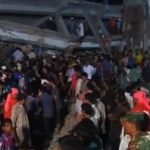 From Styleite: A sad story from the fashion world today, reports Styleite: “It’s a horrific story, and one that’s all too familiar: a building outside of Dhaka, Bangladesh housing numerous garment factories collapsed yesterday, with recent numbers putting the death toll at at least 194. The Associated Press reports that inspectors found cracks in the foundation of the building, called Rana Plaza, on Tuesday, and ordered managers to evacuate their employees. While the local bank complied, thousands of garment employees went back to work yesterday at 8:00 AM, an hour before a massive section of the eight-story building caved in. The news comes just a few months after the November fire that killed 112 at the nearby Tazreen Fashions.” Read the full story here. 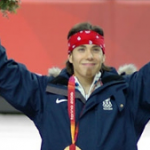 From SportsGrid: The next Winter Olympics will be missing one tried and true star. Explains SportsGrid, “After pulling in two gold, two silver and four bronze medals in the Winter Olympics over the past 10 years — not to mention awards in dozens of other competitions — Apolo Ohno has ‘effectively; retired from short track speed skating. He’ll be in Sochi for the 2014 Winter Games, but as an NBC correspondent. And so, another great athlete hopes to integrate seamlessly into the world of television. Hope that works out for him. Most reports about this retirement have some sort of caveat, such as ‘effectively’ and ‘pretty sure,’ so maybe Ohno will drop the mic at some point in Sochi and climb onto the ice.” Read on here. 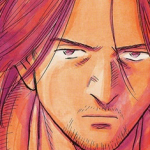 From The Mary Sue: Cable’s getting nerdy, writes The Mary Sue’s Rebecca Pahle: “I can’t even joke about Guillermo del Toro picking up tons of projects anymore. It’s too easy. The new addition to his slate is the manga Monster, which del Toro is TV show-ifying for HBO. (Game of Thrones. A Guillermo del Toro-helmed manga adaptation. Dang, HBO. So geeky. Keep it up.) Monster concerns a young neurosurgeon named Kenzō whose past comes back to haunt him in the form of the eponymous “Monster,” named Johan, whose life Kenzō saved when Johan was just a boy. Written and illustrated by Naoki Urasawa, it was made into an anime series a few years back. del Toro’s original idea was to adapt Monster into a movie for New Line, but given its 18 volumes would’ve been kind of hard to trim down to a two-hour running time, that plan never materialized. But now HBO has commissioned a pilot.” Read the story here. 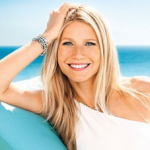 From The Jane Dough: People has named their most beautiful person of 2013, and The Jane Dough’s Meredith Lepore has some thoughts on it: “Talk about going through a range of emotions in a short amount of time. Gwyneth Paltrow has gone from being named the most hated celebrity (as deemed by a Star Magazine poll) to being the most beautiful woman in the world (this week) according toPEOPLE Magazine. Basically, you are allowed to hate her for telling us to eat tons of kale and garden seven hours a day but you should also remember that she is one of the most attractive people walking the earth right now and outranks Kerry Washington and Jennifer Lawrence (who made the list but not the cover). You’d think the editors at these magazines could have planned this a little better. Though being beautiful does not necessarily make you well liked, it’s quite the turnaround for Ms. Paltrow.” Read more here. 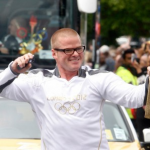 From The Braiser: Celeb chef Heston Blumenthal has a strange piece of advice to offer: cook with pee. The Braiser reports: “The three-Michelin-starred ‘smouldering geek’ (thanks for that descriptor, The Guardian) tweeted this in what we sincerely hope to be a bit of that dry, British humour Americans have such a hard time with: ‘Don’t let @BearGrylls have all the fun. With any recipe that calls for water you can substitute it with urine.’ You are joking, right Heston? Just having a laugh? Taking the piss out of us, if you will. Until that can be confirmed, we would not advise cooking with pee — no matter how much fun Bear Grylls has with the stuff (and by ‘fun’ we do mean survival in the wild, y’all).” See the tweet and read the story here.