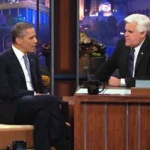 From Mediaite: A big name stopped by The Tonight Show with Jay Leno last night: President Barack Obama. Mediaite reports, “President Obama joined Jay Leno on Tuesday night for a wide-ranging interview that touched on everything from his recent lunch with Hillary Clinton to reassurances that the NSA surveillance programs are not as overblown as they’ve been made out to be. He also opened up about the international terror alert the government issued over the weekend.Obama admitted he was disappointed that Russia offered asylum to Edward Snowden, but said he still intends to attend the G20 summit in Russia when that comes up. He declined to opine much on Snowden, but insisted that the NSA programs are not that threatening and domestic communications are not being collected en masse.Obama also reflected on his remarks about Trayvon Martin and the racial dialogue he thinks the country needs to have.” Watch the full interview here. 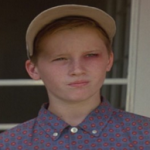 From Gossip Cop: You’re killing me, Smalls! The actor who originated this role has found himself in some legal trouble: “Tom Guiry, best known as Smalls from “The Sandlot,” was arrested for allegedly head butting a cop and trying to kick him in the face over the weekend.The actor reportedly became belligerent after a United Airlines employee told police at the Houston airport that Guiry was too drunk to fly.According to TMZ, when an airport cop approached Guiry and told him he could choose a public intoxication arrest or the drunk tank, the former child star began to berate and threaten the officer.Guiry then allegedly attempted a kick to the cop’s face and then head butted him.Wow. He was arrested for felony assault of a police officer and subsequently released on $5,000 bail.” Read the piece here. 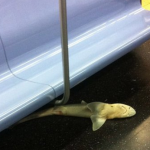 From Geekosystem: Shark Week seems to have gotten a little too real in New York City. Geekosystem explains, “Angry science junkies may have boycotted Discovery Channel for airing that completely bogus Megalodon documentary, but apparently the Universe won’t allow us to let go of Shark Week so easily this year. Or, at least, this dead shark that showed up on the N train last night in New York City didn’t. We’re sorry, Shark Week.According to a tipster at the Gothamist, the entire subway was abuzz with this unusual discovery. “One of my fellow passengers remarked ‘I’ve been riding the subway for 15 years, and this is the weirdest thing I’ve seen. And I’ve seen EVERYTHING.’” Eventually MTA officials asked everyone to leave the car so they could figure out what happened.So where did this shark come from?” Find out possibilities here.

From Styleite: Fashion is headed to new heights… literally. Styleite reports, “Off-site fashion shows can be kinda annoying, what with all the trains not arriving, cabs being stolen, and buses breaking down.Of course there are exceptions to this rule – like, you know, if you’re heading to Versailles or a crumbling Scottish castle to catch some interlocking C’s. And we’re pretty sure entrepreneur-slash-model (and not the other way around) Jessica Minh Anh has an alternate mode of transport planned for when her next runway show rolls around, because it’s taking place over the GRAND FREAKIN’ CANYON. Your move, Karl. In what is obviously an industry first, models will walk at 4,000 feat on the Grand Canyon Skywalk for Jessica’s highly (pun intended) anticipated J Autumn fashion show on November 1st. In the past she’s staged runway shows at such extraordinary venues as the London Tower Bridge and a floating glass boat cruising the River Seine.” See the crazy view here. 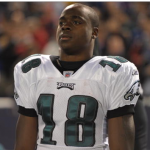 From SportsGrid: Why are so many NFL players getting hurt before the season’s even started? SportsGrid investigates: “Since training camps have started, we’ve seen a large numbers of ACL and MCL tears. Many big names have had their seasons ended already and we’re not even halfway through training camp. Many are waiving the high rate of injury off as an anomaly, but ESPN’s John Clayton talked to an NFL executive that thought otherwise: ‘Explaining the high number of injuries. The new collective bargaining agreement creates too much time for the players to rest their bodies. As one front office exec told me, long rest helps joints, but long rest isn’t great for tendons. The new work rules give players 14 weeks off from the end of the season, seven weeks to train with their teammates and then six to eight weeks off before training camp.'” Read on here. 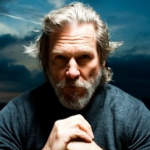 From The Mary Sue: Will The Giver become a movie soon? The Mary Sue reports, “Jeff Bridges‘ long awaited adaptation of Lois Lowry‘s The Giver has its first good sign that it’s actually happening: a major Hollywood star (other than Bridges himself) is in talks to participate. Bridges has been interested in putting The Giver on the big screen for a long time now, first coming across the story of a community that has abandoned emotion and memory for safety and consistency when his daughter read it in high school. Published in 1993, Lowry’s novel was ahead of the curve when you consider the current trend of dystopian science fiction in young adult literature. Streep is reportedly in talks to play a community elder… Deadline also names Brenton Thwaites as the actor tapped to play Jonas, the book’s twelve year old protagonist, and since Thwaites is twenty-four, I think it’s safe to say that we’ll be seeing a much more solidly teenage Jonas.” Read more details here. 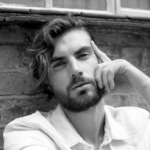 From The Jane Dough: Need a hump day distraction at work? The Jane Dough answers: “What’s in a beard? That hair which covers a face by any other formation would be considered creepy. (I’m looking at you, mustache, and I really wish I wasn’t. Because you look like something that crawled out of a shower drain and found the perfect perch from which to look at my cleavage.) But somehow the beard manages to look at once dignified and unkempt, learned and rebellious. It’s chaste but rakish, a mix that compels us to climb up the beardee as if he were some sexy oak, all the while shedding clothing like an angry nudist… just, oh god JUST LET ME TOUCH IT AND RUB MY FACE IN IT AND WAKE UP NEXT TO IT EVERY MORNING. Fashion blogger Jonathan Daniel Pryce understands the dynamic and magnetic power of beards, so much so that he dedicated himself to documenting the chin topiaries of London. In 2012, Pryce, a men’s style expert and editor of style site GarconJon.com, began the 100 Beard, 100 Days project.” See more of it here. 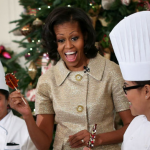 From The Braiser: There’s good news for American obesity, The Braiser reports: “Yesterday, the Center for Disease Control released their annual Vital Signs Report on America’s health, highlighting a childhood obesity statistic that was, for once, actually positive: for the first time in decades, childhood obesity rates are actually dropping in several states — specifically, obesity rates among preschoolers.And who do we have to thank for this? The CDC singled out three trends, but who cares about breastfeeding and the WIC Program? Chefs had a role! Well, really, chefs had a role through Let’s Move!, the White House initiative spearheaded by Michelle Obama that promotes physical activity and healthy eating. The First Lady boasts a magical ability to charm dozens of chefs, including Rachael Ray, Robert Irvine, Jose Andres, Bill Yosses, and British Person Nigella Lawson into teaching children valuable cooking and eating skills.” Read on here.