21 Nov What Does The Penn State Scandal Mean For Jerry Sandusky? 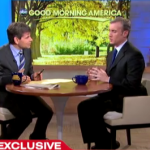 The Penn State sex abuse scandal has been unfolding with one horrible twist after another, and a seemingly endless number of victims have come forward to speak out about the abuse they suffered at the hands of defensive coordinator and children’s charity founder Jerry Sandusky. Dan Abrams commented on the scandal in two recent “Good Morning America” appearances, in which he also discussed the pros and cons of Sandusky’s claim of innocence as a legal strategy. You can see both appearances here and here.