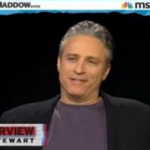 Mediaite has Rachel Maddow’s hotly anticipated interview with Jon Stewart! Stewart, who is quickly becoming the leading media scholar of our time (I don’t mean that ironically, he seriously is) offered his thoughts on FOX, the 24-hour news cycle, and coverage of events like 9/11 and the O.J. Simpson trial, with his usual dose of self-deprecation. To watch the clip, click here. 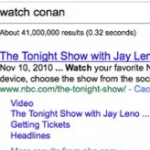 AWKWARD: Geekosystem points out that still, today, in November of 2010, the first Google search result that appears when you search “Watch Conan” is “The Tonight Show With Jay Leno!” Sorry Conan…although it might help if fewer than 100% of your jokes were about your months-old feud with Leno. Just saying. To read the full post, click here. 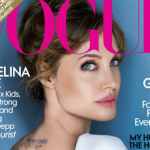 Styleite covers Angelina Jolie’s 4th Vogue cover, in which she appears effortlessly beautiful and offers more of the charming parenting anecdotes we’ve come to expect from her. Damn it. According to Angie, she’s not a very good cook (but the kids are very encouraging when she gives it a try), she loves wearing black because it goes with everything, and when one of her children fell in love with a dead bird, she offered a taxidermy pet as an alternative. The more you know! Get the full post here.

The story that wouldn’t end: Sportsgrid reports that Jenn Sterger met with Milt Ahlerich, the NFL security chief (who knew there was such a thing?) to turn over more Brett Favre-related evidence. It’s unclear what result Sterger is aiming for, but she attended the meeting with manager and lawyer in tow, so I guess we can assume it’s legal in nature. Good times! To read the full post, click here. 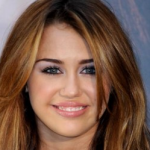 On Gossip Cop today: Miley Cyrus is the latest victim of vicious rumors! Since the announcement of her parents’ divorce, tabs have been on the lookout for Miley’s moral decline, and it appears they’ve found it: the star was recently spotted drinking a beer in Spain. You heard that right — a single beer. Will no one think of the children?! Luckily a source close to Cyrus sets the record straight. To read the full post, click here.