Mediaite has yet another development in the Sharron Angle vs. Joy Behar feud: this time, Angle sent Behar flowers along with a note reading “Raised $150,000 online yesterday, thanks for your help!” How delightfully catty! Behar, not to be outdone, thanked her for the flowers and then called her a bitch once more, with feeling. To see the clip and read the full post, click here. 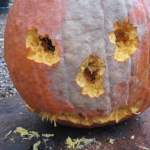 On Geekosystem today: have you ever wanted to carve a pumpkin using a firearm? YouTube user Hickock45 can help. He demonstrates the proper way to make an appropriately scary, bullet-riddled Jack-o-Lantern in just under 4o shots! The result is a little depressing, albeit very scary. Also scary: imagining how Hickock45 learned how to do this, that he filmed and posted it on YouTube, and his mustache. Get the full post here. 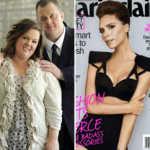 Styleite follows the controversy over a blog post on Marie Claire’s website, in which writer Maura Kelly went on at length about how disgusting she finds fat people, and how their participation in normal activities and insistence on existing kind of grosses her out. Needless to say, the post generated quite a bit of controversy (although one wonders if that was the original point) and the author was forced to apologize. Marie Claire’s Editor-in-Chief weighed in (PUN INTENDED), but didn’t do much besides praise Kelly’s ability to be controversial. To read excerpts from Kelly’s original post and Styleite’s commentary, click here. 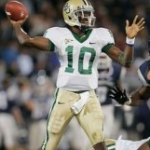 On Sportsgrid: Robert Griffin, who plays quarterback for Baylor University, used his team’s indoor practice facility to stage an elaborate proposal for his girlfriend Rebecca Liddicoat. Griffin invited family members to the event, lit candles, and had one of his teammates…play the guitar? See, this is where he lost me. Also weird: Griffin says he both “talked to” and “serenaded” Liddicoat before popping the question. Points for effort, but speaking as someone who hates any kind of direct address through song: relax, Robert Griffin. Also, congratulations! To read the full post, click here. 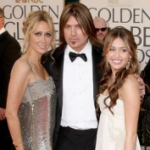 Oh no! Gossip Cop reports that Tish and Billy Ray Cyrus are filing for divorce! The couple has been married for 17 years, and in that time have raised one international superstar, one 10-year-old aspiring international superstar, and three other nobodies (seriously, I had no idea they had 5 children). It’s bad news for the Cyrus clan, and a reminder that even relatively longterm Hollywood partnerships aren’t forever. Get the full post here.