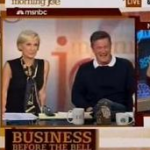 On Mediaite: everyone at “Morning Joe” was on another level today. Erin Burnett, ostensibly on for her usual “Business Before The Bell” segment, didn’t realize she was on camera, and chatted with Mika Brzezinski about doing shots and…eating weird things at CNBC? Oh and also “White Rabbit” was playing the entire time. MSNBC: your new source for weird, out-of-context “Apocalypse Now” homages. Watch the clip here. 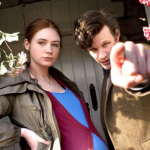 Geekosystem reports that beloved U.K. television series “Dr. Who” is supposed to film an episode in the U.S. for the first time ever. Apparently the episode will be set in Utah, and will be the first in a 2-part arc that eventually ends up at the White House. Dr. Who, I learned today, is a “Time Lord” who “fixes everything everywhere.” We’ll see how he does with Utah! To read the full post, click here. 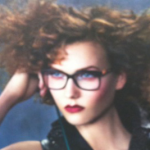 Styleite has a photo of 18-year-old goddess-like model Karlie Kloss in a Dior ad for Vanity Fair. It’s a gorgeous ad in a high-profile magazine, and any model would undoubtedly be thrilled to land the campaign…except the Photoshoppers at Dior have given her the right arm of a 4-year-old boy. Seriously, that’s what it looks like. To get the full post, click here. 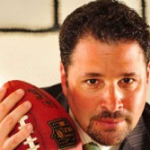 Sportsgrid has what can only be the desperate effort of a disgraced titan of his field attempting to stay relevant: now-unemployed sports agent Josh Luchs gave a surprisingly gossipy interview to Sports Illustrated, in which he dished freely about such matters as providing a clean urine sample during his time working as a ball boy for the Raiders. He also revealed that it only took some light paperwork and a few hundred dollars to become an agent in the first place, which raises the question — why does this kind of corruption and boneheaded behavior come as a surprise? To read the full post, click here. 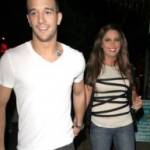 Because this is the world we live in now: Gossip Cop covers a rumor that Bristol Palin may be dating her “Dancing With The Stars” costar Mark Ballas. Ballas’s rep says the story isn’t true, but in that case I’d like an explanation for Ballas’s trip all the way to Alaska. The man has a competition to win! Get the full post here.