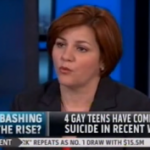 On Mediaite today: Carl Paladino’s ugly remarks about children being “brainwashed” into thinking that homosexuality is acceptable have had one positive effect: openly gay New York City Council Speaker Christine Quinn appeared on MSNBC with Contessa Brewer to discuss the recent uptick in suicides and and harassment of gay teens. Quinn’s perspective on hate crimes and Paladino’s comments was measured and refreshing, and made all the more poignant because of her orientation. To see the video, click here. 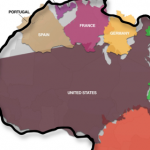 Geekosystem has a handy image of several ginormous countries superimposed onto a map of Africa. Turns out the U.S., China, and India stuck together don’t begin to equal Africa’s total landmass. Interestingly, American children tend to believe that the continent is much smaller than it actual is, with the majority of kids in one survey listing the U.S. as the country with the largest land mass and population. This is just like that episode of “The West Wing” when C.J.’s mind was totally blown by the crazy map people! To read the full post, click here. 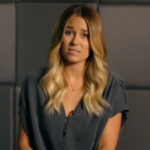 Lauren Conrad is funny! Who knew? Styleite has a PSA Conrad filmed for Ryan Seacrests’s syndicated radio show, in which she dispels the myth that having skankily-dressed friends makes you look better in comparison. Though Conrad has the street cred that comes with 2 reality shows, 2 books and 2 (I believe) failed clothing lines, even I could have told you that having anything Ed Hardy within 100 yards of you is a terrible idea. To see the PSA, click here.

Sportsgrid has video of the brain trust that is the cast of “The View” discussing one of the most important issues of our time…Brett Favre’s penis (I’m allowed to mock them because I love “The View). Highlights: Elisabeth Hasselbeck vaguely citing Deadspin as “a place you can go to for information,” Joy Behar asking if the penis in question “was attached to anything,” Hasselbeck’s conspiracy theory about the story being used to drum up publicity for an already hotly-anticipated game, Whoopi Goldberg requesting that Brett Favre sext her so she can get to the bottom of the mystery. Perfection. Watch it here. 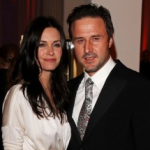 Sad! Gossip Cop reports that Courtney Cox and David Arquette have officially separated. They released a statement seemingly designed to keep hope alive by calling it a “trial separation,” and insisting that their biggest priority was raising their daughter together successfully. While it’s great that the split is so civil, it’s still another blow for long-term marriages in Hollywood — Cox and Arquette got hitched in 1999. To read the full post, click here.