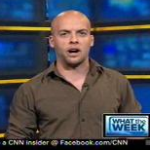 Mediaite has the story of the interviewer whose Sirius radio show featured the rant from Rick Sanchez that got him fired from CNN. Initially, Pete Dominick insisted that he’d rather not talk about the interview…but like most media personalities, couldn’t resist the urge to tell the tale. Dominick was apologetic about the aftermath of the interview, but maintained both that Sanchez arrived on the show with a “live grenade in his mouth” and that “If Rick didn’t do it on [his] show, he would have done it somewhere else.” Yikes. Read the full post here. 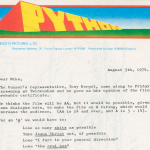 This is great: Geekosystem has a hilarious letter from Mark Forstater, one of the producers of “Monty Python: The Search For The Holy Grail” to a co-producer. Apparently a censor visited the set and left very unhappy. Fortunately for us, this resulted in a type-written letter on “Monty Python” stationary, which includes the phrases “Lose ‘the oral sex’,” “Lose ‘We make castanets of your testicles’,” and “I would like to…retain ‘fart in your general direction’.” Brilliant. Read the full letter here. 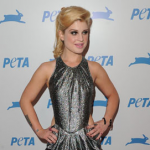 Styleite covers an interview with Kelly Osbourne on Us Weekly about (what else?) her recent, dramatic weight loss. Osbourne describes a triumphant moment during a Shape Magazine cover shoot, when she saw her picture and was reduced to tears. It’s a heartwarming moment, and wonderful to hear that Osbourne is happy. The question remains, though — what kind of weird world is it when the loss of a few pounds results in the same triumphant, sobbing hysteria as, oh, say, the fall of the Berlin Wall? Bizarre. Read the post and see a slideshow here.

On Sportsgrid today: I classify myself as neutral/ignorant when it comes to the Miami Heat, but after reading this even my first thought was “Blecch”: ESPN.com has unveiled a “Heat Index,” which is a special section of the website devoted exclusively to coverage of LeBron and his bros (Also, is “Lebros” a thing?). The list of “features” on the index is 18 points long, and it boggles the mind to think of all the people who had to greenlight this before it was made official. I mean, relax, Heat fans — last time I checked, we already have a national basketball team, and they’re called the Harlem Globetrotters, am I right? Just kidding! (or am I?) Get the full post here. 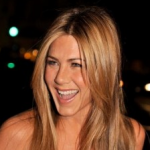 Gossip Cop reports on the recent winner of a “60 Minutes”/Vanity Fair poll regarding the “most eligible single woman in the world.” Surprising no one (right?), the champion was Jennifer Aniston by a mile, with 29% of the vote. Her competition included Elin Nordegren, Lady Gaga, and Betty White, who is going to have to content herself with not winning everything for once. Maybe now all the magazines can stop printing those “Sad Jen Is So Sad!!!!!” stories. Just kidding, they’ll never stop running those. Read the full post here.