Mediaite has the ever-helpful Rick Sanchez waxing poetic on the use of the word “bully” on CNN. According to Sanchez, “this whole term [bullying], it’s a psycho-babble, media term that we’ve made up.” Therefore, we shouldn’t pay so much attention to the Rutgers student who committed suicide after being videotaped having sex by his roommate. Oh, Sanchez, you are so wrong about so many things, and this is no different: the word “bully” (and its modern meaning) dates all the way back to the 1700s. Read the full post here. 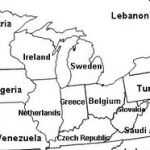 This appeals to the nerd in me: Geekosystem has a map of the U.S. with the states renamed after countries whose GDP roughly matches theirs. I was surprised to learn that my native Arizona was equivalent to Finland, while New York most closely resembled Russia. Sarah Palin’s beloved Alaska is on par with Ecuador, while California has been relabeled as Italy. This is fun! To see more, click here. 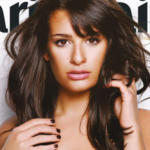 Styleite covers (hee, pun intended!) Lea Michele’s debut on the cover of UK Marie Claire, in which the actress reveals that before landing her leading role on “Glee,” she was told she “wasn’t right for TV.” But you didn’t come here to read that, did you? Michele also completes a rite of passage in the interview — the obligatory ingenue side-boob shot. Congrats! To see the slideshow, click here.

Sportsgrid covers an amusing mixup: Chad Ochocinco, of both Bengals and “Dancing With The Stars” fame, created his own brand of cereal (called “OchocincO’s”. Nice, right?) for a charity project. There was one wrinkle in the project, though — the line listed for the charity shares its phone number with a phone sex hotline. The only difference between the two is that the charity’s number is an 888 number, while the phone sex line is an 800 number. Whoops! Apparently Ochocinco has already notified the local affiliate responsible for broadcasting the number, but probably not before a good number of people attempted to donate money to the sexiest-sounding charity of all time. Read the full post here. 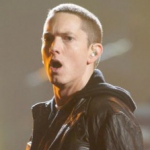 Funny headline for an even funnier story: Gossip Cop reports that “Eminem is not attached to sex drama.” Lest someone think this is a reference to the rapper’s personal life, it actually refers to a rumor that Eminem was in talks to appear in a movie called “360,” based on a play titled “Reigen” and featuring vignettes of 10 couples before and after sex. Unfortunately for those already reserving tickets to witness the rapper’s return to the silver screen, Eminem’s rep confirmed that the rumor is not true. Get the full post here.