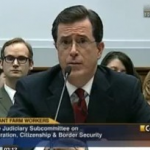 Mediaite has video of Stephen Colbert’s testimony before Congress today with United Farm Workers president Arturo Rodriguez. Color me surprised — what could have been an opportunity for cheap laughs was a biting, satirical, and smart analysis of the plight of undocumented migrant workers. Stephen Colbert’s ability to drop serious knowledge without ever breaking character is unparalleled. Try telling that to Rep. John Conyers, though — the congressman apparently asked Colbert to leave before he had the chance to testify. Rude! Get the full post here. 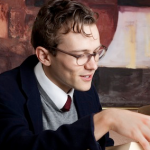 Geekosystem admirably deconstructs another one of those stupid “How To Date A Mechanic/Feminist/Rhinoceros” pieces. The latest is from semiconductor company AMD and titled “How To Get A Geek Guy In 5 Easy Steps.” Not only are these types of articles reductive and designed to elicit controversy, they’re also dumb. Take Step 3, for example: “Ask questions.” Wait — you’re telling me that geeks want to date people who appear interested in them? Why, that’s…just like every other person on the planet! Read the rest of the take-down here. 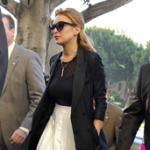 It’s wrong to laugh at a person during a moment of intense personal struggle, but Styleite has a hard-to-ignore photo of Lindsay Lohan’s police escort giving her super-high Louboutin heels the stink-eye. By all accounts, Lohan was shocked to be ordered back to jail until her next scheduled hearing on October 22, and her choice of outfit seems to confirm that she was definitely not dressing with prison in mind when she got ready that morning. Also a point of interest — the man in the far left of the photo, who looks like a cross between J.K. Simmons and a pirate. The more you know! See the photo here.

Sportsgrid has a rather baffling post about concerns regarding the amount of swearing in professional hockey. Following in the footsteps of “Hard Knocks,” “24/7” will follow the awesomely named Pittsburgh Penguins, and the less awesomely named Washington Capitals. Some people involved with the show are worried that the cursing will get out of control, as it sometimes tends to do whenever sports are involved. To this I say — didn’t we solve this problem long ago with the invention of the “bleep” sound? And isn’t “Hard Knocks” on HBO? The same channel that airs “True Blood”?! All the hand-wringing over possible swearing seems a little silly, is my point. Read the full post here. 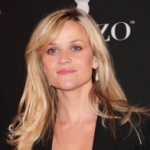 Gossip Cop squashes a rumor started by Showbiz Spy that Reese Witherspoon may have gotten a boob job. Their evidence was a photo of Witherspoon attending a benefit for the Livestrong Foundation in Hollywood looking a little curvier than usual. Despite their airtight case, a simple call to Witherspoon’s rep confirmed that Showbiz Spy is full of it. I mean, jeez, haven’t these people heard of the Victoria’s Secret “Miraculous” bra?! Get the full post here.