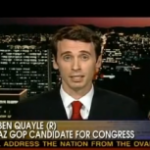 Mediaite has an interview from Greta Van Susteren’s show with Ben Quayle, who exceeded expectations and won the GOP primary for his congressional district in Arizona. His political victory has been somewhat overshadowed, however, by rumors that he contributed to popular AZ rumor website DirtyScottsdale.com. During the interview Quayle dodged Susteren’s questions, dismissing the site as “a blog that doesn’t even exist anymore.” Despite this minor political hiccup, could he be headed for victory in November’s general election? After all, Arizonans do love their nutty elected officials — just ask Joe Arpaio! Read the full post and see the video here. 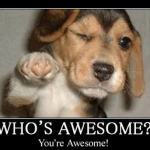 Geekosystem has a great new service for people in need of a pick-me-up, or who, uh, have no friends. AwesomenessReminders.com has someone call you every day and tell you how great you are — for a nominal fee of $10 a month, of course. It’s kind of a cute idea, but an occupational hazard of the business is that creator Zachary Burt must constantly reassure potential customers that it’s not a joke. One also can’t help but wonder how long a stranger in a call center could maintain the sincerity of their daily affirmations. Burt’s creativity is undeniable, though! Get the full post here. 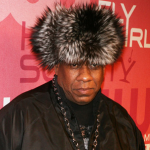 On Styleite today: how to do you top the announcement that the new “Dancing With The Stars” cast includes the likes of Mike “The Situation” Sorrentino? Why, you create a fantasy “Dancing With The (Fashion) Stars” lineup! Among the imagined contestants are André Leon Talley, Betsey Johnson, and Tyra Banks. A high-fashion “DWTS” cast would , if nothing else, guarantee that the costumes for each contestant would surpass their already insanely glittery, sparkly heights. And who knows? Hamish Bowles might really be able to cut a rug. To view the whole fabulous slideshow and indulge in some wishful thinking, click here. 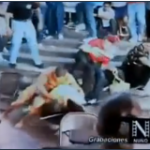 Sportsgrid has a good, old-fashioned clash of the titans: it’s time to determine the “Meathead of the Week”! In one corner, we have an angry body builder who loses his temper when talking to a judge at a flexing contest (who among us hasn’t been there?). Apparently, there’s a chair involved. In the other corner, we have a sore loser in an arm wrestling contest who reportedly holds a gun to his victorious opponent’s head. As the cast of “Jersey Shore” would no doubt plead, can’t all these gorilla juiceheads just get along? See the video and get the verdict here. 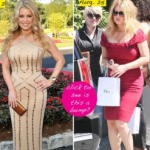 And on Gossip Cop: unfortunately for any sentient being between, oh, 2005 to the present, Jessica Simpson’s bod is the subject of national scrutiny that is alternately complimentary and cruel. The latest is an unfounded report from Hollywood Life that this one time, Simpson appeared in public looking slightly rounder than the last time she appeared in public, which obviously means that she is totes pregnant. Though Hollywood Life was satisfied with that standard of reportage and ran the item, Gossip Cop took the time to call Simpson’s rep…and got a slightly different response. To read the full post, click here.