Hooray for awkward, unscripted moments on cable news! Mediaite has a doozy: while preparing to interview Obama adviser David Axelrod, “American Morning” anchor John Roberts lost it and snapped at his co-anchor Kiran Chetry onscreen, then proceeded with the interview as normal. Whatever Chetry did to irk him happened off-screen, but rest assured it was an extremely uncomfortable moment for both anchors (and probably for Axelrod!). Since then the two have not appeared together again on the show, with Chetry returning today with Drew Griffin while Roberts is off for the week. To revel in the awkwardness, click here. 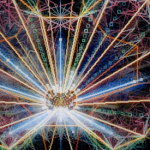 Geekosystem has some truly stunning images by artist Rosemarie Fiore, who captured each second of old-school video games like Atari in one frame, to create some amazingly organized and visually arresting radial designs. Even though our collective taste for all things retro is tiresome at times, those nostalgic artifacts can be surprising and even beautiful when they’re repurposed in interesting ways — and Fiore’s artwork is a perfect example of that! To see more of her designs, click here. 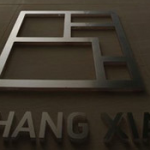 On Styleite today: There is a new Hermes store opening in China, but it’s a departure from the norm for the company, which already has 19 stores in the country. This one is called “Shang Xia,” which translates to “Up Down” in Chinese, and is aiming to establish itself on the market as a new luxury brand. From there they plan to open stores in Paris and Beijing. A bold move in this economy! It’ll be interesting to see if it pans out. To read the full post, click here. 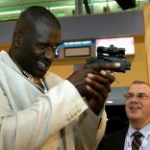 Whaaaat? In a bizarre turn of events, Sportsgrid reports that a former employee of Shaquille O’Neal is accusing him of “computer hacking, destroying evidence” and the most bizarre charge of all, “planting child pornography on an employee’s computer.” Shawn Darling, the disgruntled ex-employee who is doing the suing, has teamed up with two of Shaq’s former mistresses, who are attempting to prove that the basketball susperstar (and star of “Kazaam.” Never forget.) hacked into one woman’s voicemail and hired goons to spy on another. These allegations might all be true, but if they are, doesn’t that make Shaq some kind of criminal mastermind? And if he is, how does he have the time to be such a prolific Tweeter? Think about it, and while you do, read the full post here. 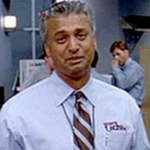 Oh, no: Gossip Cop has more on an already sad story. Actor Shelley Malil, best known for playing one of Steve Carell’s coworkers in “The 40-Year-Old Virgin,” has been convicted of attempted murder after he attacked his girlfriend, stabbing her more than 20 times. Malil’s lawyers attempted to convince the jury that there was never an intent to kill, but he was convicted nonetheless and faces up to 20 years in prison. Do you ever wonder, with stories like these, if famous actors like Carell ever read them and think to themselves, “Well, I dodged a bullet there!” (Sorry.) Get the full post here.