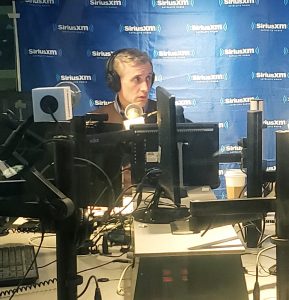 In a rare interview outside of his own show and Fox News Network, Sean Hannity joined The Dan Abrams Show for its third episode on Wednesday. The conversation focused in one part President Trump’s incendiary comments and actions, beginning with Dan’s question if Sean would consider himself an advocate for the president and leading into a discussion on Trump’s controversial public track record over the last two years. When questioned if Trump should be held to a higher standard of communication as president, Sean argued that

“Donald Trump was not elected to be your typical president. He was elected to be a disruptor and he’s doing the job that the American people hired [him] to do. That means he is never going to be the establishment figure that people in the media want or expect him to be. He’s not going to conform. But I’ll say something else––is the media does a pretty good job of bashing him pretty much every second, every minute of every hour of every day. And what I pride myself in doing is something different than what they do. There’s plenty of Trump-bashing on radio and TV and in the newspapers. My criticisms are far more nuanced because I think I have a better handle on the Trump audience than anyone else in the media.”

Sean Hannity is a nationally syndicated radio talk show host and can be heard on over 600 stations including Patriot Channel 125 from 3 p.m. to 6 p.m. He is a New York Times Bestselling author and can be seen nightly at 9 p.m. ET on the Fox News Channel where he has been for 23 years.

The Dan Abrams Show: Where Politics Meets The Law airs on SiriusXM POTUS Channel 124 from 2 p.m. to 3 p.m. every weekday.