09 Feb ‘Off with His Head’: The Obsession to Bring Down Brian Williams 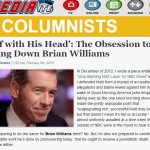 Dan wrote an article for Mediaite.com on the recent media revolving around NBC’s Brian Williams. Williams is under fire for allegedly reporting false statements and fabricating important details while reporting on a variety of stories during his time at NBC’s Nightly News. While Dan is not defending Williams, he does make a point not to disregard all of the positive work he has done in the past. Dan states, “The problem for Brian is that unlike an opinionated cable news host who might have an army of like-minded supporters prepared to fight the social media war, a network news anchor’s support these days is inevitably going to be far less passionate, even for Brian. They may like and appreciate him but few are going to be prepared to do “battle” for him.” Read the full piece here.