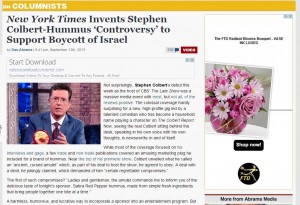 With the debut of Stephen Colbert’ s newest gig, the New York Times really thought they were onto something. Dan wrote an article for Mediaite.com  on the absurdity of The Times claim via reporter and blogger Robert Mackey, that Colbert secretly plugged a Palestinian effort called “B.D.S” (Boycotts, Divestment and Sanctions) why promoting the show’s sponsor Sabra Red Pepper hummus. Dan wrote, “Alas, maybe this piece, like Colbert’s shameless plug, was demanded by an evil ancient amulet. But in this case, that amulet might just be a particular bias at the paper of record.”  Read the full article here.