14 May Missing Arizona Girl: Was the Father involved? 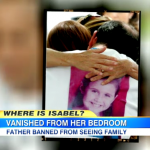 Dan Abrams and Nancy Grace appeared on Good Morning America to discuss what’s happening to one Arizona man, who in light of his daughters disappearance has been banned from seeing his other two children. Police have acted, according to Nancy Grace, as if this were routine. Dan agrees to say that it’s a big deal, and not at all common practice. “Taking away his kids? This is a very Draconian measure to take. Even looking at it through the sort of ‘access to children’ prism, if we think this guy is a real problem for his children…you’ve got to believe that in the context of this investigation they have learned a lot more about familial relationships here but at the very least, have concluded that there is a reason to keep this man from his kids.” There was a lot of commentary on how the parents reacted upon the disappearance. “It’s not very instructive in any of these cases. I don’t think how someone deals with the media and the public is significant. I do think that when you’re told you can no longer see your children: that is very significant. I can’t see any other reason but that they believe his other kids to be at risk.” Watch this discussion in full here.