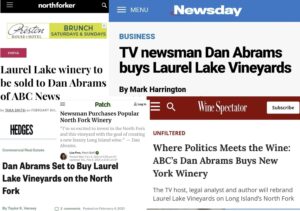 In the wake of the announcement that author and media entrepreneur, Dan Abrams, has purchased a Long Island winery, a number of local media outlets and wine publications have responded. Originally announced by The Hollywood Reporter in January, Long Island’s Newsday, Patch, Behind the Hedges, and Northforker are just a few of the local publications reporting on the news, as well as wine outlets such as Wine Spectator.

Abrams purchased Laurel Lake Vineyards, a 40-acre farm located on Long Island’s North Fork earlier this year. “Expanding into the wine business has long been a passion of mine,” Abrams told Patch in a statement, “and this winery presented a perfect opportunity to create an experience that both local residents and seasonal guests will enjoy.”

According to Behind the Hedges, Laurel Lake currently sits in a “colonial-style building,” and has “a tasting room with an antique landmark bar, stained windows and a gift shop.” The winery has a two-story deck that looks out onto the vineyard’s land, providing what Behind the Hedges calls a “favorite place for guests to enjoy a glass of wine and some music.”

While Abrams plans to completely rehaul the vineyard, starting with a relaunch under a new name this summer, there are some things he plans to keep the same. Juan Sepulveda, head wine maker and former co-owner of Laurel Lake, confirmed to Newsday that Abrams has asked him to stay on, “I’ll be very happy to continue with the wine here and take it to the next level.”

“Cabernet Sauvignon, Merlot, Cabernet Franc, and Chardonnay” are some of Laurel Lake’s current plantings according to Wine Spectator’s Unfiltered, but “Abrams anticipates investing in some new vines.”  “Dan is coming here with great ideas,” said Sepulveda, and he’s not the only one looking forward to working with Abrams. Signed on to the project as managing partner is Vanessa Price, best selling author of Big Macs & Burgundy: Wine Pairings for the Real World. In a statement to the Northforker, Price said she is “thrilled to be joining Dan on this exciting North Fork endeavor,” and is “passionate about bringing these great New York wines to a wider audience.”

Local officials have also expressed excitement about the newest addition to the North Fork family. “We look forward to welcoming Dan Abrams to the Long Island wine industry,” Long Island Wine Country President, Kareem Massoud, told Patch. Massoud believes Abrams’ purchase of Laurel Lake reflects an increasing popularity of Long Island’s wine community and, as he told Northforker, is “a testament to what many of the pioneers have accomplished in the first place.” Southold Town Supervisor Scott Russell told Patch he “hadn’t had a chance to meet” Abrams yet, but is “looking forward to it. It sounds like he has exciting new ideas.”

Abrams plans to announce the new name for Laurel Lake in the coming weeks, with a relaunch planned for this summer and many more exciting changes in the years to come.