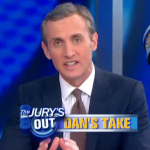 Dan led another segment of “Jury’s Out” on Good Morning America this morning. Today’s controversial topics up for discussion: Do parents have more of a problem with nudity or violence in a film? Is it time to start holding parents criminally responsible if their children are cyber-bullying? Are parents letting their kids too easily quit activities that they suddenly decide they don’t like? Dan’s take on nudity or violence? He says he thinks more parents would care more about nudity in films than violence but a poll taken reported that 69% of parents say violence is worse for kids in film as opposed to 31% who say nudity is. On cyber-bulling?  Dan thinks its going too far to hold parents criminally responsible and on quitting activities too soon…well you may have to go watch the segment ( this one might hit close to home for him) to hear his take on it. Click  here to see the debate and also the viewers opinions on the topics!