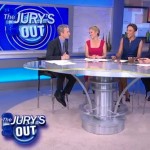 Dan hosted a segment of Jury’s Out on Good Morning America, Thursday, May 29th. The first topic up for discussion comes from a recent survey in Parents Magazine that says 71% of parents say that it is okay for kids to play with toy guns, such as water guns. Dan and the other anchors seem to think that it is pretty reasonable to let kids play with a squirt gun or cap gun but what did the viewers have to say? Next up, a high school in Arizona is getting a lot of heat for dedicating two pages of it’s yearbook to teens who are pregnant or parents. Some people are saying that is “glamorizes” teen pregnancy. What did Dan have to say? “I think it’s fine… I think these are probably kids who have had a much harder high school experience …and I think celebrating is okay.” The third topic looks at a new study that shows women who drive while pregnant get into more accidents because of something called “foggy pregnancy brain”. Should there be any driving restrictions placed on pregnant women? 88% of viewers who voted in the flash poll said no. See what everyone at the table had to say and watch the full clip here.