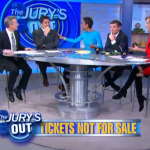 Dan held a segment of Jury’s Out on Good Morning America, Wednesday, January 15th. The first topic up on the docket was about photoshopping in magazines. An editor at Cosmopolitan Magazine, admitted that they  were guilty of using photoshop to make skinny models look fuller and healthier. Is it okay to use photoshop to change the appearance of models? Dan’s take? Why not. The next controversial topic up for discussion sprouted from a mother who, to punish her daughter for cyber bullying, made her post a photo of herself holding a sign on the internet apologizing and stating she is selling her Ipod and donating the money to charity. Has this mother gone too far? Some say the mother is now cyber bullying her daughter. The final topic was about the Seattle Seahawks decision to not sell NFC Championship tickets to any one with a California address, as the Seahawks are playing the 49ers. What do you think about this? Watch the full clip here.