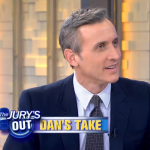 Dan hosted another segment of Jury’s Out on Good Morning America, Friday, February 21st. The first topic up for discussion: should parents be able to monitor their teens’ Facebook activity? In the GMA flash poll, ” Should parents be able to stalk their teens on social media?”, 68% of participants said yes. The next up on the docket, a group of top chefs are saying they might ban camera phones from their restaurants because it distracts other people from their dining experience. Do they have a point or is this too far? And finally, a study shows that certain word choices can get your dating profile more attention, one of the more startling findings; females who refer to themselves as “girls” instead of “women” get more attention, see what the Jury’s Out panel has to say about that, watch the full clip here.