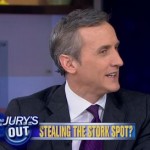 Dan hosted a segment of Jury’s Out on Good Morning America Wednesday April 9th. The first topic up for discussion starts with the Jersey Shore reality star Snooki. Snooki, who is in fact pregnant, posted a photo of herself parking in a pregnancy parking spot and some of her followers blasted her saying that if she can still work out she shouldn’t be snagging the coveted spot. Should it matter how far along a woman is when it comes to these spots or not? Next on up on the dockett was a Twitter controversy. A new study says that people who are active on Twitter are more likely to fight with their spouses, cheat and ultimately get divorced. Does this seem right?  The last topic for the Jury comes from a  new Veet body hair removal advertisement that is saying women should be ashamed of their body hair…is this inappropriate? See what the Jury has to say and watch the full segment here.