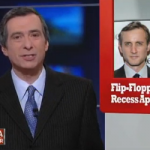 Dan recently penned a piece for Mediaite.com on the media hypocrisy surrounding President Obama’s recess appointments and the federal ruling against them. He begins, “Last week the Federal Court of Appeals in Washington D.C. ignited a new round of predictable, hypocritical mudslinging with a ruling which declared President Obama‘s ‘recess appointments’ unconstitutional. Recess appointments of top federal officials were envisioned by the Constitution, and Presidents since George Washington have used them, some more regularly than others.” You can read more of the piece here.

On CNN this weekend, Howard Kurtz referenced it when comparing the media response to Obama’s use of recess appointments versus President George W. Bush’s use of them. “Good for Dan Abrams for spotlighting these rather flexible standards,” says Kurtz. Watch a clip of his show here.