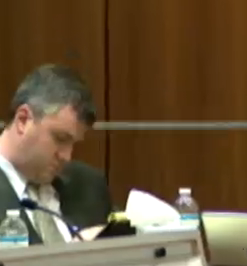 Dan Abrams returns for the third time to Good Morning  America to discuss developments in the Gabe Watson trial.  He pointed out strengths of both the prosecution and the  defense, but there’s an overarching concern for lack of hard  evidence. Watson’s story doesn’t make sense, he keeps  changing it, but it is hard to disprove based (mostly) on  testimonies. Key witnesses, such as dive expert Adam  White, confirm parts of what the defense alleges (that  Watson himself was struggling, that his dive computer  reflects a fairly rapid ascent), but don’t address whether or not Watson stopped to try and help his wife. The prosecution had Tina’s father testify that Gabe pushed Tina to upgrade her insurance policy and make Gabe the beneficiary. She did not, which Gabe may or may not have known. The fact that Gabe also tried to cash in on their travel insurance policy (to which he was the beneficiary) doesn’t make a strong argument for their side. There is nothing technically wrong with collecting insurance benefits when they are due – that’s what insurance is for. Though Gabe may not be your “typical grieving husband,” it does not make him guilty.