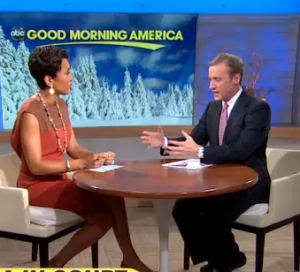 Dan Abrams returned to Good Morning America to help  speculate on the continuing trial for Gabe Watson.  Focusing on the newest testimonies, Dan still considers  it a tough case as both the prosecution and defense  showed promising ones. If the prosecution were to win,  he pointed out, a key witness might well have been the  doctor on board the same dive boat. This man’s  testimony  basically suggests that Gabe Watson’s story  doesn’t fit.  Other witnesses from the dive, however, testify to the defense’s aid – confirming that the currents were in fact strong, and that Gabe did go to Tina. Dan stressed the importance of these accounts in a case like this, which has almost no hard evidence. Unfortunately for the prosecution, he added, the fact that testimonies are coming so many years later does not help. Watch the full dialogue here.