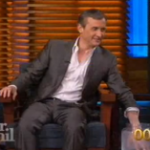 On Mediaite: Dan Abrams appeared on Dr. Phil’s show to discuss his new book “Man Down,” and ended up having to put his money where his mouth was in a contest between himself and a female audience member. Both Abrams and his opponent submerged their hands in ice water, and true to form, it was the woman who came out on top. Watch the competition here.