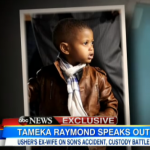 Today, Dan brings you an exclusive interview with singer Usher’s ex, Tameka Raymond, whose public and heated custody battle has been brought back into the limelight after her son nearly drowned in a pool last week while under Usher’s care. Dan discusses her relationship with Usher, their divorce, their custody battle, and the accidents that befell her sons recently as he sits down with her. Part of the interview aired on Good Morning America today, and more will be revealed on tonight’s episode of Nightline. Of Tameka, Dan says, “She has dealt with the sort of adversity no mother should know. One child dead, and two weeks ago another narrowly survived drowning in a pool. Now Tameka Raymond is speaking out for the first time about her most recent scare, and what she really wants from the legal battle that’s heated up with her superstar ex..” See the part of the interview from Good Morning America here.