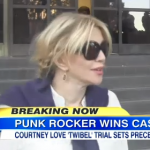 In addition to co-hosting Good Morning America on Saturday January 25th, Dan also discussed an update on the Courtney Love Twitter defamation case. The rocker was on trial for the first ever liable case involving Twitter. Love was accused of supposedly defaming one of her former lawyers in a tweet. The verdict was handed down after three hours of deliberation by a jury and Love was found not guilty. This trial proved to be very significant. Says Dan, “Well, it was the judge’s ruling early on that made this so important. It was by the judge saying I’m going to let a jury decide this case. As a legal matter I’m going to treat what you write on Twitter the same way that we would treat something you write in “The New York Times. That’s what made this so important and it became the first case based on a tweet that went to trial. Because he could have just dismissed this from the get-go.” Watch the full clip here.