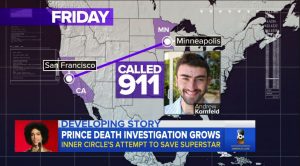 Dan appeared on Good Morning America, Thursday, May 5th to discuss the latest details on the mystery surrounding Prince’s death. The U.S. Attorney’s office and DEA are now joining the investigation as we learn more about a California doctor who says he was called to help the superstar with an addiction problem. An ABC affiliate confirmed with law enforcement that prescription drugs were found in Prince’s system and apparently the singer’s inner circle were trying to get him help. Watch the full story here.