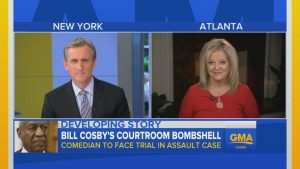 peared on Good Morning America, alongside of HLN’s Nancy Grace,  Wednesday, May 25th to discuss the latest Bill Cosby bombshell. The former TV dad will stand trial on charges that he drugged and sexually assaulted women in 2004.  More than 50 women have accused Cosby of sexual assault and the prosecution is likely going to fight vigorously to try to get their testimony included in this case. Dan commented, ” The question is will they be able to testify? And if they are, this case against bill Cosby is going to be a very powerful, strong one. If they can’t, if a court deems that they cannot testify as part of this case, this is not going to be that easy a case against Bill Cosby.” Watch the full segment here.