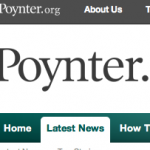 A recent article on Poynter.org, titled “Abrams warned of  media mistakes before Supreme Court ruling,” praises Dan for his legal scholarship and accountability in his analysis of yesterday’s landmark Supreme Court opinion regarding Obama’s health care reform. Comparing it to Bush v. Gore, writer Mallary Jean Tenore criticizes how the media is often too fast to interpret what they think the law means, instead of taking time to actually read and understand it. Writes Tenore, “Abrams said there are steps journalists can take when covering Supreme Court rulings to reduce the risk of inaccuracy. Most importantly, he said, journalists should quote from the opinion rather than making declarative statements about what they think it means… Abrams also suggests that reporters be open to admitting what they don’t know. He was reminded of this while talking about the ruling on “The View” this morning. When asked whether any of the provisions had been struck down, Abrams admitted that he hadn’t yet read the entire 193-page opinion and didn’t give a declarative answer.” This advice comes after CNN and Fox News both initially incorrectly reported the Court’s decision yesterday. Read the full article here.