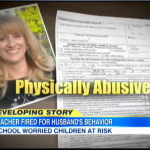 A Catholic school in San Diego that fired a teacher, Carie Charlesworth, is now under fire for its decision.  The school claims that her ex-husband’s criminal behavior makes it too dangerous to have her around the children.  Today, Dan appeared on Good Morning America to discuss the type of lawsuit that Charlesworth can take against the school.  Dan says, “It’s going to be a tough lawsuit.  She’s allowed to ask for time under California law to go deal with this issue in the courts.  But she is not protected as is the case in a very few states from being fired based on being a victim of domestic violence there is a bill pending in California that would protect victims of domestic violence from this sort of action but that’s not the case currently in California, so it’s going to be an uphill battle.”  Watch the segment here.