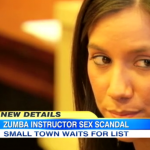 Dan appeared on Good Morning America today to discuss the case of a Kennebunk, Maine zumba studio that was actually a front for a prostitution ring. Business partners Alexis Wright, 29, and Mark Strong Sr, 57, ran the studio and were charged – Wright with 106 counts of prostitution, violation of privacy, tax evasion and other charges for allegedly providing sex for money at her fitness studio and a nearby one-room office she rented, and Strong Sr., with 59 counts of promotion of prostitution and violation of privacy.They both pleaded not guilty. Now it is to be determined whether the names of the alleged John’s will be released in a detailed police report, and two of the Johns’ attorneys are asking the judge to withhold it. There’s a “small chance” the judge might not release it, but the judge “shouldn’t surpress it,” says Dan, continuing, “Remember, when adults are charged with a crimes, it’s public record – and if we’re going to say in this case that the names shouldn’t be released, then why shouldn’t other people who are charged  with rape or financial crimes… well then their names shouldn’t be released either, so I don’t see why this case would be treated differently than any other case.” Watch the video here.