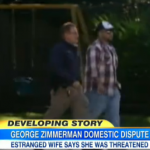 Dan stopped by Good Morning America today to discuss why George Zimmerman found himself back in the headlines, but not in legal trouble, yesterday. The man acquitted of murdering Trayvon Martin is at the center of a domestic dispute involving his estranged wife, Shellie, and in-laws. He was taken into “investigative detention” after Shellie, called police claiming George was threatening her and her parents with a gun. She later backed off from that statement, saying she never saw a gun despite what she told the 911 dispatcher. When the police arrived, they did not see the gun and police said they assumed it was in his car but didn’t plan on getting a warrant to look or retrieve it. The incident occured days after Shellie filed for divorce and discussed their relationship on TV. Dan says, “It’s kind of amazing – this is a guy who’s been in the most high-profile case in a long time, and he’s pulled over twice for speeding, helps a different motorist – gets in the news for it, and now he’s in the news again for a different incident… this is a guy who needs to stay out of the spotlight in any way shape or form he can.” For what lies in his future, watch the full segment here.