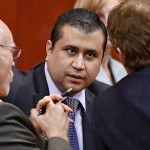 In an abc.com article, Dan answers the public’s most popular questions asked after the Zimmerman verdict had been reached.  On Monday, Diane Sawyer was asking her followers on Twitter, “What is your number one question?”  @AWrobley asked, “If Zimmerman was told 2 stay in car, why did he get out & pursue Tray?”  Dan replied, “He wasn’t told to stay in his car.  When he told the non-emergency operator that he was following Martin, he was told ‘you don’t need to do that’ and he responded, ‘Ok.’  He was already out of his car at that point.  The question is did he keep following Martin as prosecutors allege or was he just walking back to his car as Zimmerman claims.”  Read on here.