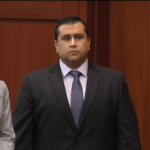 ABC News Saturday evening to discuss the verdict in the Zimmerman murder trial.  George Zimmerman was found not guilty after a two-week-long trial.  Dan says, “This was a tough case for prosecutors from day one.  Let’s remember this does not mean that these jurors are saying they support George Zimmerman.  What they’re saying is that they do not believe the prosecution was able to prove its legal case beyond a reasonable doubt.  And the legal issue here for prosecutors was a very difficult one — George Zimmerman’s defense was that: ‘As I was lying on the ground, Trayvon Martin was hitting; was attacking me.  I shot him at that moment because I reasonably feared that he was going to hit me again and it was going to be great bodily injury. For the jury to find him not guilty, all they’re saying is if it was reasonable doubt.”  Watch the segment here.