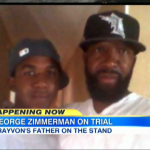 This morning Dan appeared on Good Morning America to discuss the testimony of Trayvon Martin’s father, Tracy, who, it is being suggested, has changed his story.  Dan says, “The defense is calling witness after witness to say it was George Zimmerman.  Even if this jury isn’t sure, that’s a win for the defense.  That’s reasonable doubt. So, I think that’s all the defense is really trying to do here.  Now, calling Tracy Martin was a risky move.  There’s two police officers testified that the first time Tracy Martin heard that tape, he did not think it was his son, Trayvon.  We have the police officers’ testimony. But they wanted to call Tracy Martin.  So, in conjunction with getting an effort to undermine Tracy Martin, you get the very emotional, powerful side of Tracy Martin, the dad, testifying in effect on behalf of Trayvon.”  Watch the segment here.