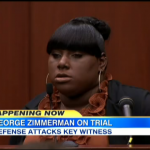 During the Zimmerman Trial yesterday, Rachel Jeantel was called back to the stand for a second day of questioning.  She was the last person to speak to Trayvon Martin before his encounter with Zimmerman.  Jeantel is possibly the most important factor standing between Zimmerman and an acquittal.  Dan appeared on Good Morning America this morning to discuss how Jeantel’s testimony affected the prosecution’s case against George Zimmerman.  Dan says, “This is not the witness you want if you’re the prosecution.  And this is the last person who spoke to Trayvon Martin. There’s inconsistencies in her story.  As you heard, she was attacked, again and again on cross-examination. With that said, you saw that section there where she talks about how she can’t read cursive. She doesn’t seem educated.  But don’t underestimate her.  She’s still smart. The attorney was trying to ask her questions to get her to catch things.  And she said, ‘That’s not what i said.’  While she’s not worldly, so to speak. She  understood what she was being asked.  She understood the questions.”  Watch the segment here.