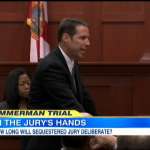 On Saturday morning, Dan appeared on Good Morning America to discuss the jury’s deliberation.  The Zimmerman trial jury has three options that they can choose to charge George Zimmerman with: second-degree murder, manslaughter, or to find him not guilty.  Dan says, “If these jurors follow the letter of the law and jurors in high profile cases tend to follow the letter of the law, then I think they’ll find him not guilty.  What does that mean?  It means that won’t have been able to find beyond a reasonable doubt that it wasn’t self defense at the moment that this happened.  And people talk about the elements needed for second degree murder and manslaughter in those are all true, but the most important legal issue for these jurors this: have the prosecutors overcome proving beyond a reasonable doubt that it was not self defense in that moment.  And I think that most people who have been watching this case, most lawyers in particular, think that’s a tough tough burden for the prosecution.”  Watch the segment here.