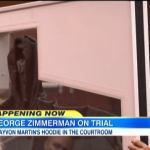 Yesterday, during the second day of the George Zimmerman Trial, the prosecution called in a crime scene technician to present evidence that was the found near Trayvon Martin’s body.  Dan appeared on Good Morning America this morning to discuss the testimony of the first eyewitness to come to the stand in the Zimmerman case.  Dan says, “And she’s crucial because she is the first eyewitness to testify in this case.  And she’s saying two things. Number one, she says that someone was running. And she described the direction that the running was occurring.  Why is that important? Because it would suggest that this running, this chasing was occurring in an area in a George Zimmerman says he never was. And ‘B’, if they were running at all, that’s also helpful to the prosecution’s case.  The prosecution’s theory was that Trayvon Martin was effectively hunted down. That’s why that cross-examination was so important. The defense attorney saying, ‘A’ you’re biased and ‘B,’ you never said this before. Why is this the first time you’re mentioning that? Very important point in the courtroom.”  Watch the segment here.