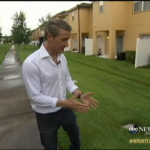 Yesterday, during the sixth day of the Zimmerman Trial, audio recordings of were played in court of Zimmerman’s account as described to police, of what happened on the evening that he shot Trayvon Martin.  The jury heard five accounts of Zimmerman’s description of events, as well as watched a video recording of Zimmerman walking through events the day after.  Dan discusses, from Sanford, Florida, how the events of yesterday’s trial, helped Zimmerman’s defense.  When discussing the police officer witnesses who took the stand yesterday, Dan says, “The first police officer to respond was Doris Singleton.  She testified Zimmerman didn’t even know that Martin had died.  She even tried to comfort him… The lead investigator says his statement was pretty consistent and so either he’s a pathological liar or he’s telling the truth.”  Watch the segment here.